The contents of this website (texts, images, photos, videos, drawings, etc.) are aimed exclusively at healthcare professionals and not at the public.

Are you a healthcare professional?

Primary study aim has been the assessment of the effectiveness of BICARMED technology on reusable surgical instruments. Effectiveness has been compared with that of the current procedural standard at the sterilization center of Padua Hospital.

It was analyzed a sample composed by 29 multipurpose osteotomy burs. Dirty surgical instrumentation, before being directed to the cleaning procedure, were photographed (Nikon D300) and subjected to analysis with a microscope or with scans and photographs with a Dino light 500X microscope. These data represented the t = 0 corresponding to the pre-cleaning starting situation, both with standard technique and with BICARMED technology.These devices were then differently grouped:

Group 1: composed by 3 burs, after being used at the O.U. during standard surgery, they were photographed and stored individually in a sterile test tube and sent to the sterilization process of Padua Hospital which provides:

Group 2 : composed by 6 burs, they have been used to simulate a craniotomy surgery on anatomical corpse, subjecting them to more than ordinary use both for the cut extention and for the using time, in order to make more severe the cohesion between the instrument and the contaminant. They were then photographed and stored individually in a sterile test tube and sent to the cleaning process according to Bicarmed protocol which involves mechanical cleaning with SAFEKlinic sodium bicarbonate .

Group 3 : composed of 20 burs used in conventional clinical practice. They were then photographed and stored individually in a sterile test tube and sent to the cleaning process according to BICARMED protocol. Group 4: composed of unused burs considered as check on results.

Group 4: composed of unused burs considered as check on results.

At the end of the cleaning phase, both standard and with BICARMED, the burs of group 1-2-3 were photographed again and scanned with a microscope. 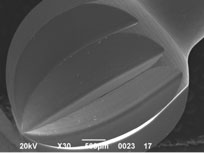 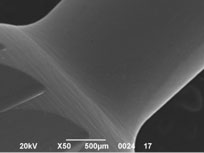 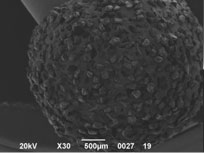 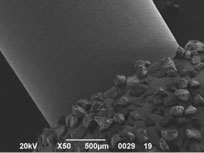 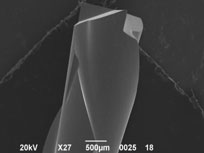 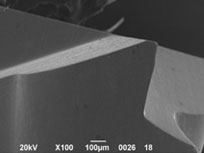 The samples of group 1 showed surfaces particularly altered after the standard cleaning treatment.

Rose head burr with standard treatment RP26 (n. 12-S-0010): the burr surface results particularly altered; it is possible to identify rather large particles, whose total area represents 9.28% of the burr area; these particles have a uniform chemical composition: calcium, phosphorus, oxygen (residual bone tissue) and other trace elements, which are mainly arranged along the protusions and in the grooves. 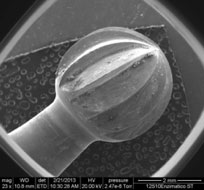 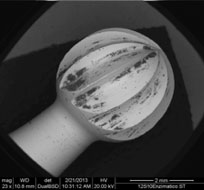 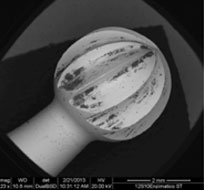 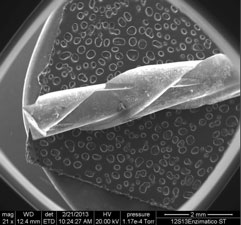 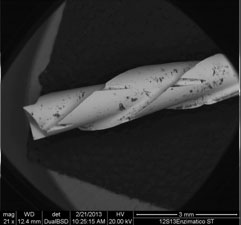 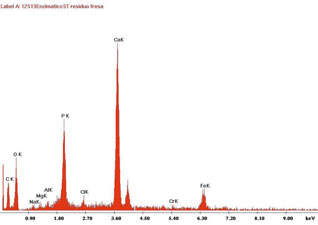 Diamond burr with standard treatment DP27 (n. 12-S-0016): diamond burr surface does not appear altered except for some depression on the matrix due to the absence of diamond fragments; it is possible to identify small particles, whose total area represents 0.23% of the diamond burr area; these particles have a varied chemical composition: gold, nickel, iron (steel), oxygen plus other trace elements; 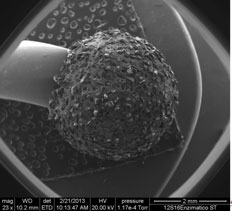 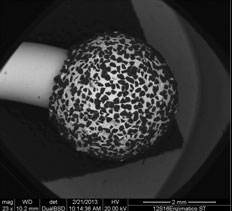 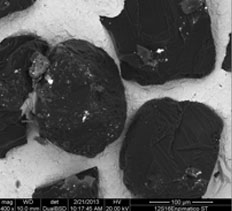 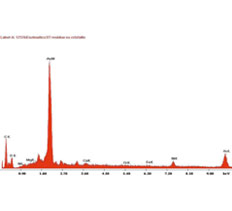 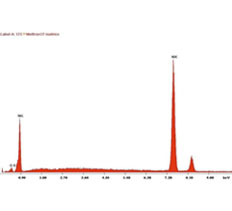 Diamond burr with BICARMED D24 treatment (n. 12-S-0015): surface of diamond burr “head” ,composed by nickel and carbon (diamond) results intact; they are not identified any foreign particles on the surface. 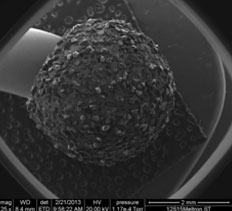 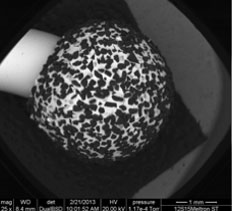 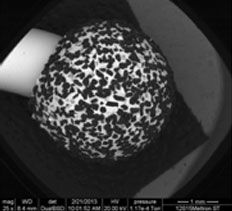 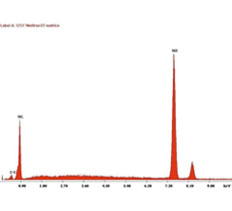 BICARMED treatment, unlike the standard treatment currently used at Padua Hospital, removes any residue without superficial alteration of the sample. Brushing unfolded in fact an ineffective procedure due to the dimensional nature of the brushes in relation to the object to be treated and was found to be one of the causes of the alteration of the surfaces of the instrument itself. The increase on the surface roughness of the surgical instrument due to these practices allows the deposit of residues, triggering an endless vicious circle for the challenge of pre-washing and washing.

The treatment with sodium bicarbonate SAFEKlinic unfolded to be effective and functional as a pretreatment of surgical instruments, ensuring the removal of contaminations considered severe or complex in a short time.

Complete removal of the contaminants without producing superficial alterations from the surgical instruments guarantees safer and more efficient results to subsequent thermo-disinfection and sterilization processes.

In addition, BICARMED technology guarantees a 360 ° increase in safety in the process of reuse of surgical instruments; for the operator in the workstation since he can work under the hood avoiding reverberations or aerosols during the manual treatment phases at sink; for the patient, as show the qualitative obtained results (what is not clean cannot be sterilized Spaulding) and finally for the instruments, since this technology guarantees high cleaning performance without any consequences for the instruments with the consequent increase in the possible reuse cycles.